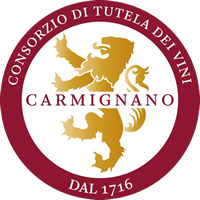 Wine has been produced in Carmignano since the Roman times. The discovery of an award given by Julius Ceaser for wine production, and jars of wine in an Etruscan tomb made historians first aware of this. The wine production industry is as old as the Ancient Roman art which brings tourists flocking to Tuscany every year. The region between the Arno and the Ombrone rivers has experienced a continuous growth of vines since the Roman times.

A lease for land dated 804 A.D. describing the cultivation of olive trees and vines has been found in the State Archives of Florence. This remarkably shows that wine has been produced in Carmignano for 1200 years, making it one of the oldest industries across the whole of Italy. Datini Carmignano bought his vineyard in Parto in 1600 with Redi describing the wine as being worthy of Jupiter (the most powerful of the Roman Gods.)

In 1716 Carmingano was chosen by the Grand Duke Cosimo 3rd to be one of only four areas dedicated to wine production. The award of the prestigious “Motu Proprio decree” and famous Florentine “Contract,” imposed precise rules governing both production and geographical limits on trade. This contract made Carmignano the first “D.O.C.” in the world. It was these events, which gave Carmignano formal recognition for the first time.

Through the late 1800’s and the early 1900’s the production of wine in Carmignano was conducted under the control of Niccolini.

The 1930’s saw changes in the wine industry, highlighted by the return t.o the use of the name Carmignano The Medici family’s old version of the D.O.C. was incorporated into the D.O.C. of the new Chianti Montalbano. Count Ugo Contini Bonacossi according to Cianchi Poggiolo (the mayor and chief engineer of Cappezzana) was the main influence behind the changes which occurred and set the foundations for the successful wine production which can be seen today. In 1975 he was the first producer to receive the acclamation of D.O.C. which was actually given retrospectively from the 1969 harvest.

This acclamation was further fortified in 1990 when the D.O.C.G. was awarded, again retrospectively dating from the 1988 harvest.

It must be appreciated that this is more than the historical recognition of quality wine production. Carmignano is home to some esquisite grape varieties which are hard to find in the rest of Tuscany. Therefore the wine produced in Carmignano with its coveted flavours is very different from other Chianti wines.

The Cabernet grape has grown on the sun drenched hills of Carmignano for over five centuries. It has been discovered that they were first planted on the request of Catherine de Medici the then Queen of France in the sixteenth century. The grape was named “Grape Francesca,” a clear diversion from the French “Cabernet,” from which this grape derives.